If you’ve ever been gobsmacked at the lies anti-vaxxers spout, or the idea that grazing on your own backyard lawn can cure cancer, or that 2 million people praying can somehow alter the collective consciousness of the entire planet, then this post is going to blow your mind.

Junk science. It’s the topic of part four in a series about wrongful convictions in America called Reasonable Doubt. Here are the other parts:

Atheists and skeptics routinely scoff at homoeopathic remedies that have no scientific data supporting them, but did you know that the American justice system (and many other justice systems like it) often admit similarly junky science as evidence in criminal proceedings? It’s true. Men and women have been convicted, incarcerated for life and executed based on “science” that is not actually science and is in fact, no more accurate than a crystal ball.

Junk science in the criminal justice system is science that has been debunked, refuted and discredited by actual science. Unfortunately, for the wrongfully convicted, debunking and discrediting evidence seems to have no effect on its validity in court. Prosecutors call expert witnesses to the stand, who use language like “does not exclude” or “is consistent with” to a jury of laymen. Jurors listen to a man of science say that this matches that, and trust that this man of science knows what he’s talking about. Rarely is the type of evidence and the scientific methods used to test and analyze it, scrutinized. It’s easy in this sort of situation, to persuade a group of laymen that fibre analysis is just as accurate as a DNA test, when in actual fact, it’s not at all. Despite this, junk science can be cited as a significant cause in 49% of all DNA exonerations since the founding of the Innocence Project.

There are many types of junk science, and I’m sure you’ve come across most of them if you’ve ever watched CSI, Law & Order or any of those other poorly done cop shows. Today, we’ll go over some of the most commonly referenced forms of junk science and some example cases in which someone has been convicted based on that junk science.

1. Hair and fibre Analysis – In 2009, the National Academy of Sciences published a report that concluded hair and fibre analysis has no scientific support whatsoever. While some hair strands can be DNA tested with accuracy, the practice of comparing hairs under a microscope for similarities has been conclusively debunked. The FBI, in recent recognition of this, admitted to having expert witnesses testify about hair analysis in thousands of cases since 1985, including 27 men who sit on death row. They have pulled 2000 case files for review that contain hair and fibre analysis evidence and testimony. That’s two thousand men and women who could very well be innocent in prison… and have been there for decades.

The case of Anthony Hicks ended in a DNA exoneration after he spent five years in prison for a sexual assault he did not commit. Hairs found at the scene were said to have been “consistent with” Anthony Hicks’ hair, and hair found on Mr. Hicks was said to be consistent with the victim. Expert forensic scientists took the witness stand to explain that the hairs matched, and that made up the only physical evidence that pointed to Hicks. He was sentenced to 20 years.

2. Fingerprints – It’s true that everyone has unique fingerprints. However, many fingerprints contain multiple similarities in ridges and ruling out every single other human being who was living at the time of the crime, is something that has never actually been tested. There have been no studies conducted on the probability of error and ridge characteristic similarities.

Stephen Cowans was convicted of a 1997 shooting of a police officer. His conviction was based on the expert testimony of a forensic scientist who said a fingerprint found at the scene matched the prints of Cowans. After five years in prison, Cowans was exonerated based on DNA evidence recovered from the crime scene. The fingerprint analysis was proven faulty.

3. Dog scent lineups – Dog scent lineups are pretty self-explanatory. A dog is allowed to sniff the scent of the victim, and then sniff out the suspect or crime scene to detect a match. This type of identification has been recently ruled out as admissible evidence in many parts of the world, not because the dogs aren’t doing what they are supposed to, but because the methods with which their handlers train and conduct the lineups are inconsistent, uncontrolled and the handlers themselves may not know well enough what they’re doing. It’s impossible to get inside of a dog’s head, and even more impossible to rule out multiple scents, scent confusion and other variables. For years, however, this evidence was admissible in court and led to many convictions, such as that of Megan Winfrey:

Jesse Miller, Jr. was charged and convicted of robbery and the murder of a Chik-Fil-A manager. His conviction was due, in part, by the testimony of an expert handwriting analyst. The analyst examined a written note at the scene that contained a series of numbers believed to be the combination for the safe in the restaurant. Jesse was exonerated this year by DNA evidence after serving five years of a life sentence.

5. Shoe prints, Toolmarks and Bullet striations – It makes sense that every tool, shoe or gun might leave behind a unique mark or print. The problem here is that the possibility of discovering those unique qualities in tool marks, shoe prints and bullet striations to the exclusion of every other object like it, ever built, has never been proven. There is no actual science backing up the claim that every tool, gun or shoe leaves a unique mark or that we can assess how unique a mark is with the tech we currently have.

Carl Earl Lawson was convicted of the murder of a child, based in part by the expert testimony that shoes found in his possession matched shoe prints found at the scene. He was exonerated by DNA evidence after spending six years in prison.

6. Polygraph tests – Aldrich Ames was the highest paid spy in American history. He spent decades on clandestine assignments for the CIA, when he switched sides and became the USSR’s inside man at the agency. He was convicted of espionage and is currently living out life in a federal penitentiary.  From prison, he penned the following letter to Steven Aftergood of the American Federation of Scientists. The letter contains his many criticisms of the polygraph test, and it later came out that he, himself, beat the test (read the transcript here): 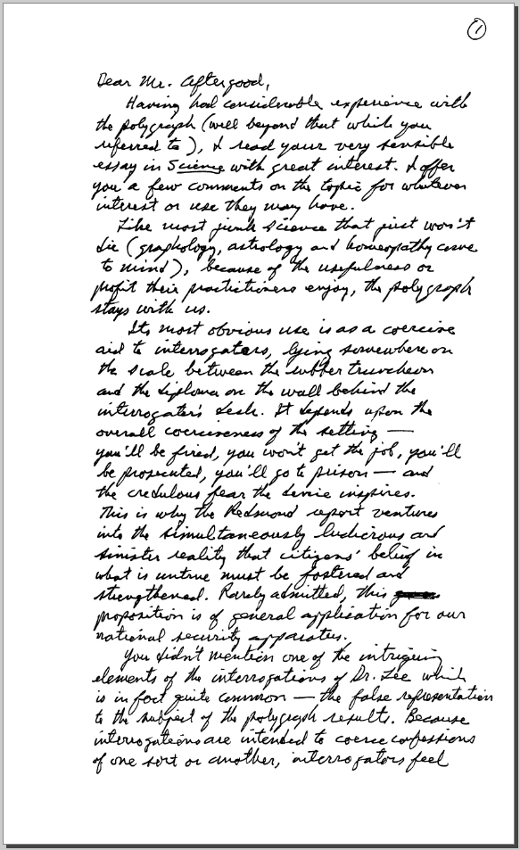 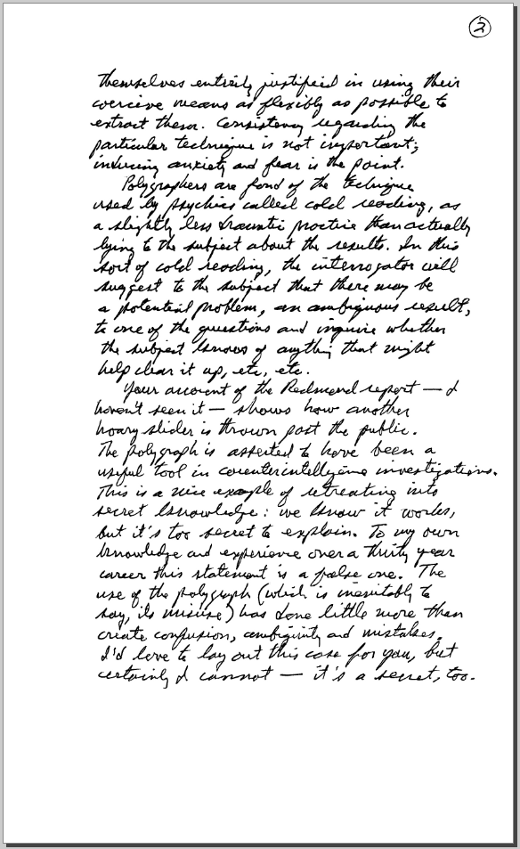 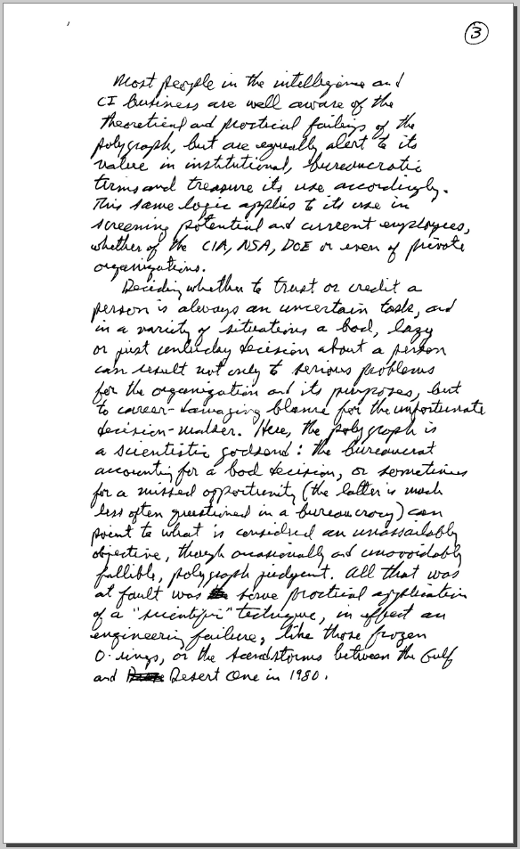 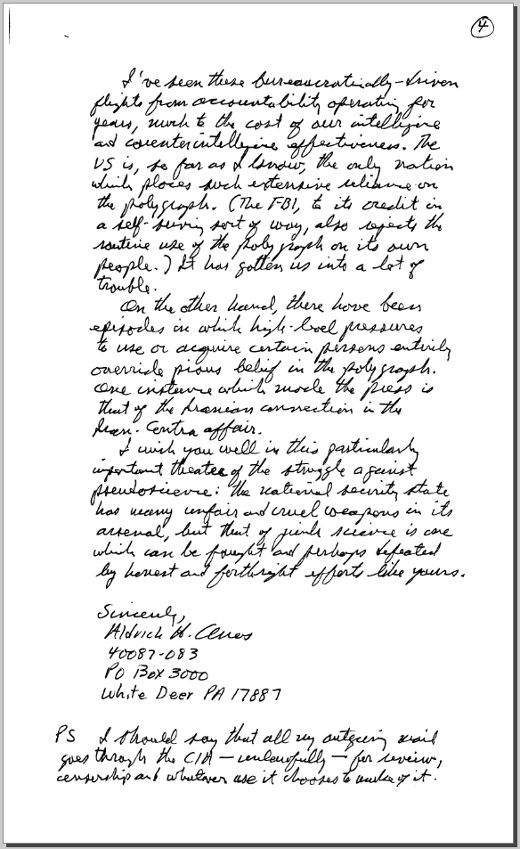 Ames admitted that he beat the test administered by the CIA while he was working as a double agent for the KGB. He was advised by the KGB to relax during the test and he would pass. He did. Twice.

Shockingly, polygraph tests are still used commonly today, despite the fact that false positives have been produced at an alarmingly high rate. In 2003, the National Academy of Sciences published a report that stated that most of the “science” behind the polygraph is unreliable, not based in actual science and biased.

Despite this, a failed polygraph test is still admissible in court in many states and counties.

Unsurprisingly, when a jury hears that a defendant fails a polygraph test, the rest of the evidence then becomes tainted or skewed. Juries go into trial unaware of the fact that a polygraph test is not actually scientific and many believe that it is trustworthy and reliable.

7. Blood Analysis – While blood typing is scientific, it’s often inaccurate, especially in crimes where the sample may be contaminated by other samples from the victim. Admitting blood type evidence into court in front of a jury of laymen, is not a good practice, either. Juries will often hear that the blood type of the defendant matched that of the blood found at the scene, but they won’t be told that near half the world’s population also matches that blood type, unless the defendant’s counsel is on the ball.

Both Paul House and Alejandro Dominguez spent years incarcerated for crimes they didn’t commit, based on blood typing evidence. DNA tests on that very same evidence, saw them both exonerated.

These are some of the most common types of junk science still used in courtrooms around the world. Dishonourable mentions go to hypnosis or regression therapy, psychological profiling, blood spatter analysis and bite marks. None of these admissible forms of evidence are based in actual science.

How do we fix this problem? It’s simple. Only allow the admission of evidence that is based on tested, peer-reviewed, and reproducible science.

From the Innocence Project:

It’s not difficult to convince a jury of laymen that something is or is not valid evidence. A jury is not made up of scientists. It’s made up of gas station attendants, retail managers, veterinarians, that lady who serves you at the McDonald’s drive-thru. There is no required level of scientific knowledge to be eligible to serve on a jury. That is not to say juries are stupid. They are, however, largely uninformed. Prosecutors use that fact and the chances that the defense lawyer is likely subpar and won’t poke holes in the accuracy of the science, to get the convictions they are under immense pressure to obtain. This leads to many wrongful convictions and plays a serious role in near half of all the DNA exonerations of men and women by the Innocence Project.

As a citizen who is eligible to serve on a jury, this is all information you need. Who knows, maybe one day it will help you spare a man the death penalty.

If you like what I do here and want to support my work, you can chip in here or become a member here.

This is part 4 in a series about wrongful convictions in America called Reasonable Doubt. Here are the other parts:

Atheist Inmates In Their Own Words: Critical Thinking Behind Bars

Sneak Preview: Atheist Inmates In Their Own Words

Innocents: The Body Behind The Dumpster

I Fucking Love Being An Atheist Women's Racerback Tank

I Fucking Love Being An Atheist Women's Racerback Tank